What Does the Booking.com #Scotus Case Mean for Tech?

Re: U.S. Patent & Trademark Office v. Booking.com B.V., Case #1946, United States Supreme Court (2020) - (A case in which the Court will decide whether the addition by an online business of a generic top-level domain (".com") to an otherwise generic term can create a protectable trademark, despite the Lanham Act's prohibition of generic terms.) 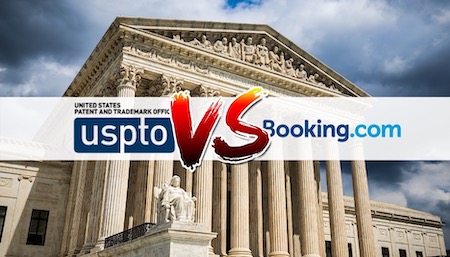 Quite apropos of the high-tech subject matter and parties involved, the first SCOTUS oral arguments conducted via remote teleconference went into the history books on May 4, 2020. As visions of High Court Judges hearing this case from their breakfast nook, in house-slippers flashed through our minds, it quickly became clear that the star of the show was the attorney for Booking.com. Lisa Blatt, who has a record of 36-2 before the Supreme Court put on an oral advocacy clinic. She previously clerked for Justice Ginsburg, represented the Redskins in their trademark defense and wrote an important op-ed supporting Justice Kavanaugh’s confirmation to the SCOTUS. Though she had the harder argument, she will likely be 37-2, when this ruling is handed down. She is also probably a future Justice herself. To founders of startups, the significance of the anticipated ruling should not be underestimated. At its essence, the issue here is whether "Booking.com" is a generic term and whether granting such top-level domains a trademark will in effect grant them something akin to unfair monopoly status.

Without doubt, a ruling favorable to Booking.com will impact how founders think of their branding and IP strategy. If they side with booking.com what will that mean for startups and their branding and Trademark (“™”) strategy? No doubt, this will increase the value of premium domains such as Law.com, Company.com, Application.com, etc. Founders would and should be more inclined to acquire and utilize such generic sounding words as their domains as they will be buttressed by the power of the “™.”

If a term is deemed generic, it is not registrable or protected as a TM. The basic test for whether something is generic is if it is the common term for the relevant goods or services. For example, the term "car" is generic in connection with vehicles for transportation (or the like). Based on the established precedent, simply adding "Inc." or "Co." to a generic term does not make it registrable. However, a few things are at play here which favor Booking.com's position: (i) Booking.com is not the generic term used to describe the relevant service(s) or industry; (ii) consumers know a .com is basically an online store or business and not a generic term for an industry; and (iii) the public surveys conducted by experts which were in the appellate record, clearly evinced that Booking.com was a recognized brand by consumers. Just as Weather.com, Law.com, and a slew of other “generic”.com marks are registered, this ™ should be registrable. The Government expressed concern over such a ruling inviting mass litigation.

The Government's argument that this precedent would open the "floodgates" of mass infringement litigation, was overstated hyperbole. Ms. Blatt quite deftly swatted away this concern for the Court, by opining that small variation like adding an "e" to the domain (i.e. "eBooking.com") would be ok and not an infringement or at least a very difficult case for her client to prosecute. Her statement on the record does indeed bind her client in the future and can be used in any future litigation. We call this concept "judicial estoppel" in the legal profession, inter alia. Skilled litigators do this effectively as we saw here. It’s called “giving up the dogs" to save and reinforce the most important pieces of your litigation strategy.

Of course, if the SCOTUS includes this small detail in their opinion, it will apply to every litigant as well and will act to ease any concern over opening the floodgates of mass infringement litigation over small variations in .com names. After all, isn't the main concern of founders and tech companies in pursuing Trademarks to fight counterfeits and copy-cats? It should be, and a ruling consistent with the above will allow TM/domain name owners to protect their brands while not permitting squatters and trolls to exploit the system without adding value.

Overall the case went quite well. This new teleconference format is the future. This was quite a historic event and it should be the new normal for the judicial system. It is the natural progression to the welcomed e-filings systems as the technology has advanced. The Constitutionally protected public nature of proceedings can easily be respected (e.g. live-streaming all court proceedings while we hopefully move away from the obsolete system of routinely packing hundreds of people into old courtrooms, creating traffic gridlock, pollution and avoidable costs and overhead scaled across the Nation and the globe.

This was a very good start. Perhaps even more newsworthy than the precedent this case will establish in the ™ field, it will be even more significant for the example it will set for holding remote proceedings across all courthouses for most types of legal proceedings. Other than the one small glitch of Justice Sotomayor forgetting to unmute for a few seconds, and another justice sounding like Darth Vader for 5 seconds, the telephonic proceeding was an unequivocal & welcome success.

Based on the questions asked by justice Gorsuch and Justice Kagan, I believe one of those judges will write the majority opinion. These were J. kagan’s warning regarding going “a bridge too far” and J. Gorsuch’s concern over having a “bright-line-rule.” These will likely be important elements of the anticipated majority opinion.

Two amazing exchanges between Ms. Platt and the Court were truly stunning and not to be overlooked. They are a glaring highlight of what an outlier she is in handling herself before the Court and controlling the proceedings. First, was her response to Justice Bryer’s 4 part question which took 2 pages to transcribe. At the end of his lengthy question, Justice Bryer states “Now that’s lot, but I want to hear your answer to those points.” Ms Blatt, without hesitation, retorts: “Its not really a lot. First, there’s a statute. The statute determined the policy decision in our favor. It is [if] we meet the definition of the statute, we get registered...” Then she proceeded to meticulously go point-by-point and address each-and-every piece of Justice Bryer’s voluminous inquiry.

The second and perhaps even more impressive exchange was Ms. Platt’s response to a question by Justice Gorsuch regarding the expert survey citing to the Government’s brief and to an opposing amicus brief. Ms. Blatt responds by calling out Justice Gorsuch in no uncertain terms:

“MS. BLATT: Okay. So you've read the Tushnet brief and the government's brief. You have not obviously read our expert -

What is obvious here is that this is a very special advocate at the top of her game, fully within her element and expertise. It was refreshing and a pleasure to hear such excellence and I believe she may have turned the table and swayed a few Justices to “draw near and give their attention” to her position.

You can hear the arguments here.

(The author, AP Pishevar, Esq., is a 25-year veteran of the legal profession, a Top-100, AV Rated litigator. He now serves startups and tech companies as in-house General Counsel helping them avoid the legal, IP, compliance and regulatory pitfalls — avoidable setbacks which are the known causes of the vast majority of the 70% startup failure rate. AP is a serial entrepreneur/founder and an inventor of several patents. He may be reached at ap@pishevarlegal.com).

Contact Us
Practice Areas
Client Reviews
★★★★★
He was great in dedicating his time to research all possibilities of the laws and status to determine the best way to fight the case... Melanie
★★★★★
Mr. Pishevar is probably the best attorney money can buy; WHY??? Because he digs deep into your case and assures his client that failure is not an option... Brenda
View More
Submit a Law Firm Client Review